In the Heart of Prosperity

One Vision for Growth & Prosperity

Municipal, Provincial and Federal governments are working as partners with business and industry in Canada's Industrial Heartland to promote a positive economic climate. Backed by its partners, the Heartland is committed to:

With an economy growing faster than any G-7 nation, Ontario has lower business costs overall than the United States, Sweden, United Kingdom, Italy, France and Germany. Among the reasons are a provincial government committed to making the province the most competitive jurisdiction in North America. 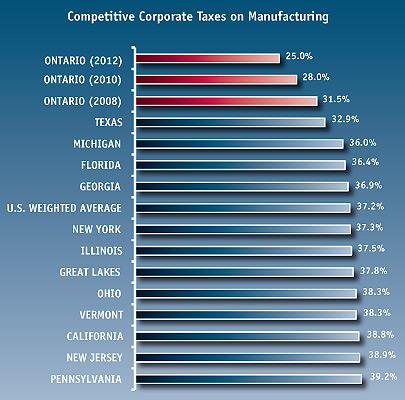 Ontario's combined federal-provincial corporate tax rate of 28 per cent is significantly lower than the US weighted average of 36.1 per cent for manufacturing. When federal and provincial tax credits, deductions and allowances are combined, companies can expect to be reimbursed for between 50 and 60% of their total research and development expenditures.