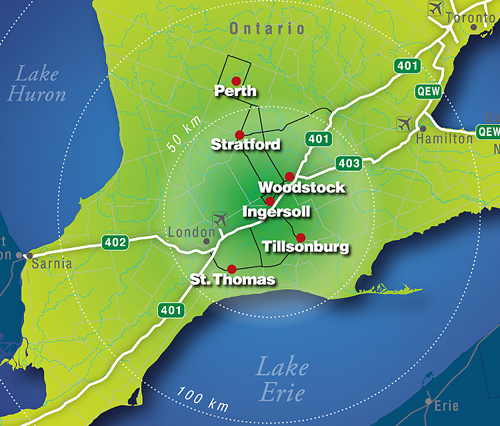 The Heartland is at the intersection of five major NAFTA corridors.

In the Heart of the Great Lakes

Canada's Industrial Heartland is located in the center of the Southwestern Ontario peninsula - an area roughly the size of West Virginia. It is home to 3 million people who enjoy the temperate climate, fertile soil, gently rolling landscape and varied stretches of lakeshore.

The climate of Southwestern Ontario is moderated by the surrounding Great Lakes and highlighted by four distinct seasons.

Truly in the heart of North America's Consumer and Industrial Markets.

“This region is very well positioned geographically, they have a workforce second to none, and a welcoming community, and that makes it an attractive place for manufacturers to open facilities.”
The Honourable Perrin Beatty, President and CEO Canadian Chamber of Commerce